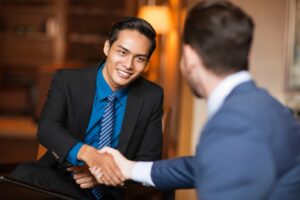 This is the story of a successful turnaround and how we overcame the obstacles that almost caused it to fail.  Burke Advisory was engaged by a trustee of a deceased business owner’s trust, in order to initially provide an assessment of the management, operations and assets of an industrial plating, coating and sandblasting company.  This eventually expanded into an assignment to repossess the assets from a defaulted buyer, reconstitute the company and sell it.  The business’s assets included equipment, inventory and a commercial building.  All of the assets were held in the former owner’s trust for the benefit of an animal rescue charity.  Eighteen months prior to my engagement the trustee sold the business through an installment type sale to a relative of the deceased owner.  At the time of our engagement with this client, there were serious doubts that the new owner could continue the business as a going concern.  He was delinquent on his installment payments and the trustee, an attorney, was quite concerned.

The company had been family owned and operated since its founding in 1957.  It primarily provided electroplating and sandblasting services to the manufacturing industry.  The company specialized in zinc, cadmium and tin/zinc plating.  It is important to mention that cadmium plating was being phased out by government regulation due to its extreme toxicity (it is a heavy metal).  In addition, for metal cleaning purposes, the company also offered sandblasting and shot blasting services.

We found the financial records to be in disarray with a significant number of inaccurate entries, as well as conflicting and missing information.  Management was unable (not unwilling) to provide any assistance or insight to assist us.  We re-configured the Company’s books, but felt they were still inaccurate and unreliable.  Initial cash flow was break-even because management elected to not pay many of its obligations.  In reality, the Company was operating at a significant loss.  Receivables were not being properly invoiced, collected or tracked.  Cash and working capital were non-existent.  Pricing made no sense and was done without regard to profit requirements.  Expenses were high and revenues were dropping like a rock.  The cash burn was significant.

Cash burn or, burn rate, refers to the rate at which a company uses up its capital to finance its losses.  In other words, it’s a measure of the rate of negative cash flow.  When there are not enough profits to cover the Company’s overhead, the funds needed must come from capital.  The Company’s falling revenues were insufficient to cover the Company’s operating expenses or production costs.  Among other things, this resulted in significant quality control (QC) problems which exacerbated the falling sales problem.  Unfortunately, at this point, due to a lack of working capital, production had stopped.

The Company was insolvent by almost any definition.  We considered it to be well within the “Zone of Insolvency”.  When in this zone, for liability purposes, the Company’s fiduciary responsibilities shift from the shareholders to the creditors.  If the Company planned to continue in business, it would require additional investment capital.

We found that management had neither the technical, operational nor financial knowledge to successfully manage this business.  The buyer had basically run the business into the ground in under one year.  Management needed to be replaced immediately.  If the Company were to continue as a going concern, a professional manager, under the direction of a qualified turnaround practitioner was required.  In the case of liquidation, an experienced liquidator/turnaround professional would be required.  The plant staff seemed relatively competent with the perquisite skills necessary to run the operation.  However, they were not being paid and their payroll withholding had been squandered and remained unpaid; a significant liability for the current owner.  Their medical insurance had also been cut off for non-payment.  They were not happy.

There were few, if any, management systems in place to track production, future business, cash flow forecasting, job profitability, process efficiency or improvement, sales opportunities, customer needs, etc.  There was also no insurance of any kind in force to mitigate any of the many risks associated with operating a business, especially a business such as this one that had a greater exposure to risk than most including environmental and safety risks.  This included coverages for building and equipment, workers compensation, environmental liability, general liability, health coverage and loss of business insurance.

Inventory is usually an asset that can be readily converted to cash.  Inventory management is critical in any production process.  The electroplating business does not create parts.  Rather, they are a value-added business; they improve parts.  This process does not require a significant investment in inventory.  Electroplating inventories consist mainly of chemicals (i.e., sulfuric acid and cyanide) and metals used in the process of applying thin layers of metal coatings to parts used in manufacturing.  Not only did we not have inventory that we could convert to cash, we actually would have to order a significant amount of it if we wanted to start up production again.

Both the building and equipment were old with some functional obsolesce.  The building was in a mature, light industrial, less desirable area of Metropolitan Detroit and had much deferred maintenance.  The equipment was in poor shape, much of it needing repair.  As a matter of fact, the entire plant was beyond dirty and disorganized.  Never underestimate the ROI of a good cleaning and paint job.  We needed to clean and paint the equipment and work areas.  We could also create some value by simply implementing some low-cost curb appeal at the exterior of the building.

After a thorough assessment of the business, its assets and the various options available to us, the trustee, the beneficiary charity and I decided the optimum solution was to reconstitute the business and sell it as a going concern.  However, we needed cash to move forward at all.  Since the trust had distributed all of its assets except this jewel of a business, I was forced to go to the beneficiary charity to seek funding.  I explained the significant financial and environmental liability they faced if we couldn’t turn this beast around.  Eventually, we were rewarded with a very small amount of funding. Much less than I had hoped.  Based upon this shortage of needed cash, we reworked the plan.

The first thing we did was to default the buyer’s installment sale agreement and repossess the assets into a brand-new single purpose company.  We sent him on his way with the old company and all of the liabilities he had created; including payroll taxes due to the IRS and the State of Michigan.  Then we proceeded to start over.  We hired the employees back and offered key people retention bonuses.

We used our employees to clean and paint the plant and building.  We fixed as much of the equipment as we could and hired out the rest.  We cleaned up any surface contamination and had all of the old barrels of toxic waste hauled away.  Our suppliers helped us to fix our QC issues and improve our production process.  Our improved chemistry now yielded a superior product.  We arranged new credit terms with those suppliers to obtain new raw material inventory in exchange for notes covering some of the prior owner’s debt.  We opened new accounts with vendors and when possible negotiated for extended repayment terms.

Simultaneously, we met with prior customers and explained what had transpired.  We assured them that we would now be able to provide a superior product along with the best service that they had ever experienced.  We promised transparency and communication.  We spoke with them about being part of our recovery and ultimate success.  In most cases they agreed to resume business with us.  A couple even agreed to give us more volume than they ever had!  We changed pricing and job size to both better reflect our cost structure and compete more effectively in the market.  We began looking for and calling on new customers.

The plan was working, and things were looking up.  I probably should have known things were going too well.  One day I got a call that there had been a small fire in a building we rented down the street where we sandblasted the parts we coated.  The fire was very small and there was no damage.  However, it apparently necessitated a visit from the fire marshal.  During his inspection he discovered some barrels that had been hidden in the back of the building years ago.  We had missed these during our initial inspection.  The barrels contained cyanide, cadmium and sulfuric acid and some of them had started to leak.  Not good.  This seemed to be the most exciting thing this fire marshal had ever come across.  He immediately had the building completely boarded up and taped off.  It looked like a crime scene.  He posted signs warning of the horrible consequences should anyone enter the premises, including us.  We had no access to our production machinery and initially could not even get in to begin to address the problem.  We were effectively out of business again.

In short order we had visits or conversations with most of the city’s department heads, including the Mayor.  As it turned out, it is illegal to store toxic waste for more than six months and it is expensive to have it hauled away.  As near as we could determine, the barrels had been there for seven years.  The EPA and the MDEQ were both notified and the little building we rented was now officially considered a “Site”, as in toxic waste contamination site.  We were looking at fines in the hundreds of thousands of dollars and possible federal criminal charges.  It was a bad week.

Fortunately, we hired the best environmental attorney in the State, Beth Gotthelf.  She got us to the right people at the State of Michigan and helped us to negotiate a resolution.  It became apparent that they were not used to dealing with a party that was as motivated to properly make the mess go away as much as they were.  Pretty soon, we were all on the same team.  We agreed to repackage the barrels and have them properly hauled to a toxic waste dump site.  In addition, we agreed to properly clean up the area where the barrels had been hiding.  We also agreed to do all of this within two weeks.  They were stunned and agreed to drop all fines and charges if we could pull it off.  Perfect; now all we needed was the money to get it done.  Long story short; we borrowed the money and resolved the problem to the satisfaction of all parties.  Within two weeks of the discovery, we were back up and running.

I think somewhere around this point, both the trustee and the trust beneficiary lost their entrepreneurial interest in the opportunity to make more money by continuing the turnaround.  Not surprisingly, they just wanted out.  So, we put together an offering memorandum and began looking for a cash buyer.  The first place we looked was our existing customers and suppliers.  A strategic buyer like this will often pay more than other buyers.  A few of our customers expressed interest.  After going down the due diligence path with two of them, we struck a deal with one.  After devising a method of protecting the new buyer from the existing environmental contamination liability, we were able to set a closing date.

We closed the sale and assisted in making a sizable donation to a deserving charity.  This engagement took ten months from start to finish and was considered very successful by all parties.

Kevin Burke is a member of the Turnaround Management Association and a Certified Turnaround Professional.  A graduate of the Villanova School of Business, he has over 35 years of experience in banking and executive management.  His management consulting practice is located in Troy, Michigan.